Do you know the lake Tovel?

I think you should, it is famous all over Europe because it used to turn red: an event that was unique in the whole world! Undoubtedly one of the most visit-worthy place in  Val di Non!

Here I am, talking to you about what may well be the best known place of the Non´s valley: Lake Tovel. About this lake, many books have been written but what I want to tell you today is that this place is magical! I visit Tovel in any season and everytime I see it, a different feeling possess me. Nonetheless, it steals my heart every single time.

My dad saw it turning red until the summer of 1964 but even if today the lake has not the color of rubins anymore, you will be stunned at first sight! Just to get here, in this magical and quiet place, and to look up to the stunning Brenta Dolomites, that reflects in these crystal clear waters, is something hard for me to put into words. I always carry my trusty camera with me and try to impress in my shots the wonder I feel when I have it in front of my eyes.

Why should you come to Tovel, you ask? Because here you will really feel one with nature, water is so transparent that some people call it the Caribbeans of Trentino and the forest all around you will fill your senses with colours, parfumes and music. 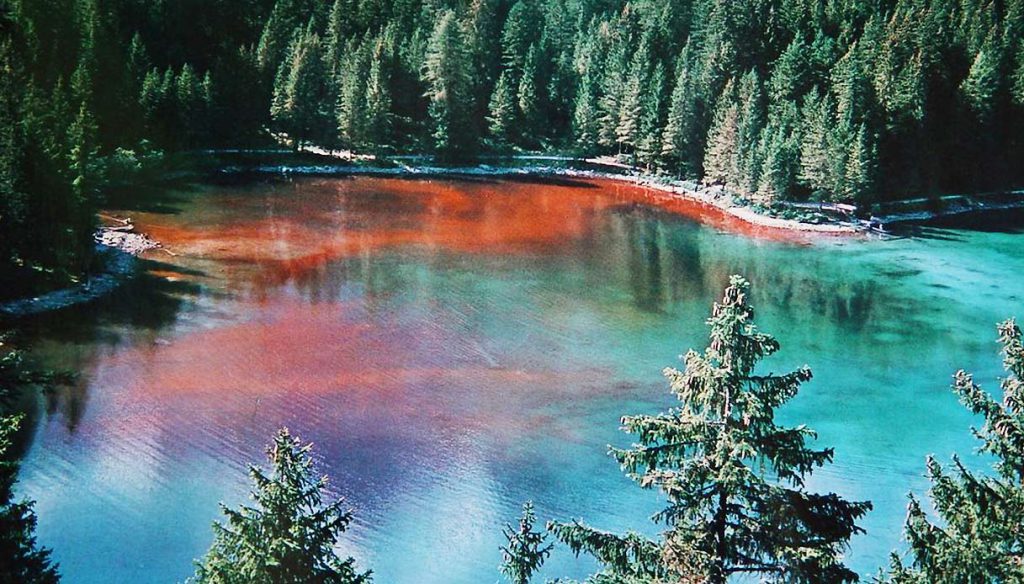 Not until long ago, it was believed that at the origin of the reddening of the waters of Lake Tovel stood an algae, the Glenodinium Sanguineum.

This waterweed, which contains oily substances coloured by carotenoid pigments in its plasma, would have caused the lake’s waters to appear red in the summer when it rose to the surface. This phenomenon has not occurred since 1964. The main hypotesis concerning its disappearance, is the lower presence of cows in the mountain pastures around the lake; in fact, it was their droppings that provided the nutrients on which the algae fed.

Recently, however, the Agricultural Institute of San Michele all’Adige has discovered that the reddening of Lake Tovel should not be attributed to the Glenodinium but to three other species of algae: the Tovellia Sanguinea (“red” species, present today in minimal quantities, given the lack of nutrients), the Baldinia Anauniensis (“green” species present today in massive quantities, from which derives the typical colour of the lake today) and a third alga whose identity is currently being researched. 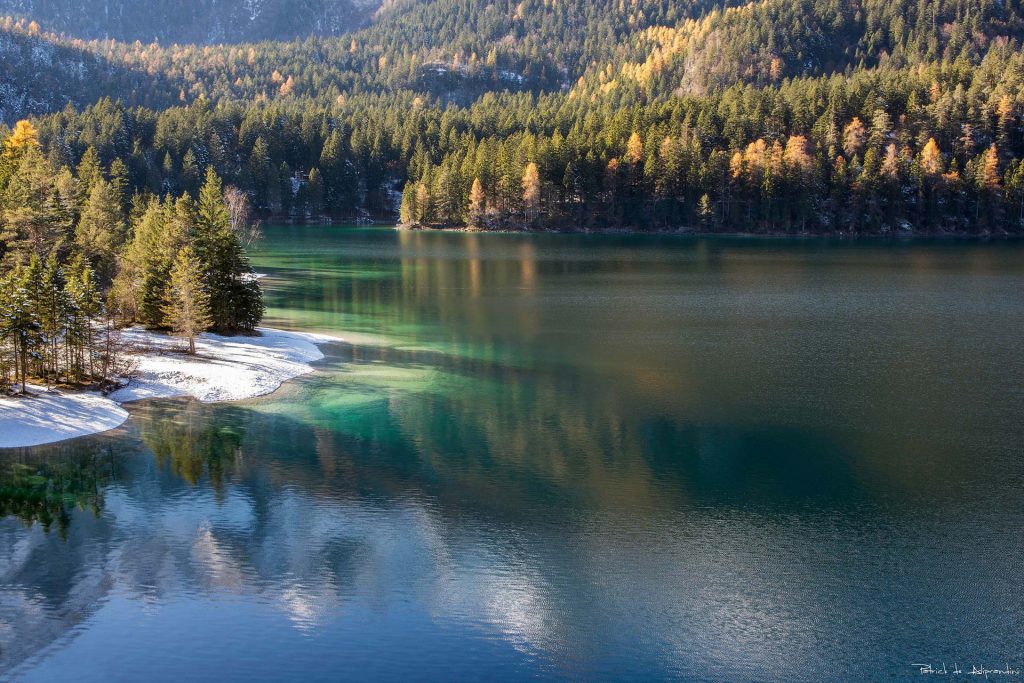 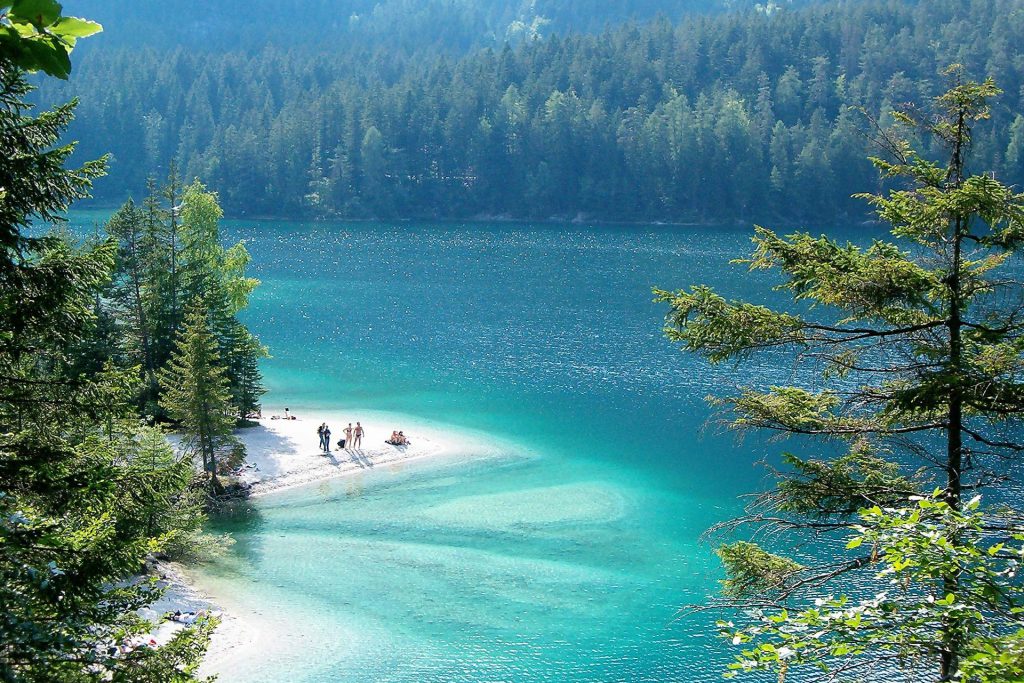 The legend of Queen Tresenga

Until the 1960s the fame of Lake Tovel was linked not only to its splendid romantic atmosphere, but also to the famous phenomenon of redness of its waters. For a certain period of time, every year, the shores of the lake were tinged with bright red. The spectacle was really suggestive and it is not surprising that, around the origins of the phenomenon, over the centuries, many stories and legends were born. The most famous of all is the legend of Queen Tresenga.

The story tells of a long time ago when Ragoli, today a small village in Val Rendena, was a very rich town at the head of a great kingdom. A day came when the last king of Ragoli died without leaving male heirs, but only a beautiful daughter named Tresenga. The anxiety of the citizens of the kingdom then grew, because everyone knew that if the princess married, all their kingdom would become the property of a foreign sovereign and this would mean the loss of all wealth for the town of Ragoli. Tresenga, however, was a very clever young woman who loved her people so much that she made a solemn oath of renouncement to any matrimonial bond in order to save her kingdom. The beauty and wealth of the young queen, however, were well known by all the young cadets of the neighboring territories who did not want to miss the opportunity to become rulers of such a powerful kingdom and, at the same time, husbands of the most beautiful princess ever seen. The most stubborn and superb suitor proved to be the young and arrogant king of Tuenno, Lavinio. He tried twice to win the heart of Tresenga, first by displaying all his power with magnificent gifts, and then by trying to soften the princess with a simple bouquet of flowers. In both cases, Tresenga’s response was an outraged refusal. The double offence hit hard the young king’s pride and soon turned his love into anger, so much so that Lavinio gathered his forces determined to march on Ragoli and burn it to the ground.

Tresenga, informed by her messengers of Lavinio’s punitive expedition, questioned her subjects asking them whether they would rather see her married the king of Tuenno or fight a battle that could cost them their lives. The people of Ragoli had no doubt and immediately sided with the young queen, determined to risk everything for their freedom. They marched together to the shores of Lake Tovel, and here they found Lavinio’s army camped for the night. A bloody battle lasted for several days. The army of Tuenno was too strong and well prepared to the battle to succumb to the weak, though fierce, people of Ragoli. Soon all the citizens of Ragoli were violently killed and, at last, the beautiful Tresenga also perished under the sword of the invading king, not before fighting bravely and tenaciously alongside her people. Her blood and that of all her subjects poured that day into the waters of Lake Tovel and colored it with a macabre vermilion. From that sad day, once a year on the anniversary of the grim battle, by magic, the waters of the lake began to turn red and there are those who swear that, even today, when the full moon shines on lake Tovel, the sad figure of the beautiful Tresenga wanders sighing along the shores of the lake, crying for the lost lives of her beloved subjects.

Find out more or adjust your settings.

This website uses cookies so that we can provide you with the best user experience possible. Cookie information is stored in your browser and performs functions such as recognising you when you return to our website and helping our team to understand which sections of the website you find most interesting and useful.

Strictly Necessary Cookie should be enabled at all times so that we can save your preferences for cookie settings.

If you disable this cookie, we will not be able to save your preferences. This means that every time you visit this website you will need to enable or disable cookies again.

This website uses Google Analytics to collect anonymous information such as the number of visitors to the site, and the most popular pages.

Please enable Strictly Necessary Cookies first so that we can save your preferences!